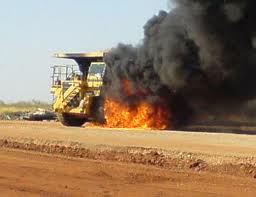 Executive Risk Solutions recently conducted a fire investigation into a fire at a premises containing a large cache of heavy duty tyres used in the industrial and resources sector. The investigation process is important when fires occur as it takes the organisation through the continuous improvement cycle and enables a number of key workplace outcomes to occur:

With that said it is also worthwhile to look at the hazard that tyres pose when exposed to fire. Tyres represent a high fire hazard with the amount of smoke and heat they generate. Under certain conditions fitted tyres can explode, and incidents have occurred which have led to fatalities.

Tyres on trucks, cranes and other heavy vehicles may catch fire under a range of circumstances, with the obvious potential for the tyres to then explode.

A lesser-known danger arises when the combustion takes place inside the tyre with no external signs. Whenever excess heat is developed in or applied to a tyre, it can initiate a process within the tyre known as pyrolysis – the decomposition of a substance by heat. This can cause a build-up of flammable gases and pressure within the tyre, which may ultimately rupture or explode.

Enormous amounts of energy can be released by a tyre explosion, often leading to significant equipment damage, serious injuries or fatalities. Pyrolysis related explosions are unpredictable, and have occurred immediately or up to 24 hours after initiation. An explosion can occur where no fire is visible and the danger area can be up to 300 metres from the tyre.

Background of the Tyre Industry 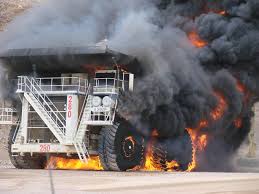 Tyres, as we know them today, originated from a scientific discovery and a simple idea. The discovery occurred in 1839, when Charles Goodyear found that heating raw rubber latex with sulphur induced a polymerisation reaction whereby elastic rubber is formed. This reaction is now referred to as rubber vulcanisation.

The idea came later, when John Dunlop thought of a possible way to give his son a far more comfortable ride on his tricycle. This was by putting rubber tubes filled with air on the wheel rims to serve as an air cushion. This was so popular, that Dunlop eventually began to manufacture pneumatic tyres from about 1890 onwards.

In 1895 the pneumatic tyre was first used on automobiles, by Andre and Edouard Michelin. It was also around this time that legislation was put into effect that discouraged the use of solid rubber tyres. All over the world companies sprang up to meet the new demand for the new tyres.

It was from this point that world manufacture of vulcanised rubber took off and today, tyre production consumes 60% of world rubber supplies. Current worldwide production stands at about one billion tyres per annum, and is climbing.

Tyres typically contain about 40% natural or synthetic rubber. Carbon black is added to serve as reinforcement, oil as a softening agent and waxes to inhibit ageing, so that service life is prolonged. Other chemicals are added to precisely control the degree, and rate, of the vulcanisation process. 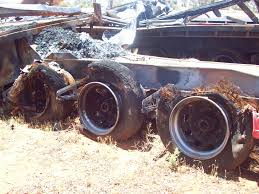 Tyre fires produce large amounts of thick, black smoke. The black component consists primarily of carbon black and semi-pyrolysed rubber. The other components include the usual products of combustion – carbon dioxide, water, sulphur dioxide, nitrogen oxides and carbon monoxide, as well as usual range of irritants, such as dipentene, isoprene and the aldehydes. Finally, trace amounts of cancer causing polynuclear aromatic hydrocarbons (PAHs) are also likely to be present.

If the oil in tyres does not catch fire, it will be forced out by the hot rubber. This can cause a pollution problem if it is carried away by the fire water used as an extinguishing agent.

Tyres will ignite at about 288 to 343 degrees Celsius. They do not easily catch fire, but once they do, they will burn with increasing intensity. They generate heat at a rate approximately equivalent with coal, a lot less than petrol and twice that of wood.

When tyres are placed in a pile, the open structure makes the use of water as an extinguishing agent ineffective. Experience has shown that the best approach is to smother, either with foam, covering with dirt or using heavy earth moving machinery to break up the piles. 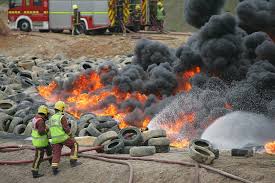 Mine sites and Emergency Response Teams should have established procedures to follow when personnel suspect there is danger of a tyre explosion, e.g. after a rubber tyred vehicle has contacted overhead power lines.

This hazard must be recognised, and the possibility of tyre pyrolysis and explosions must be considered in the development of a specific industries safety and health management system. 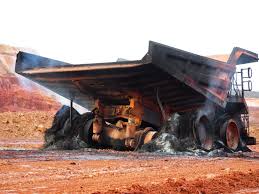 Piles of used tyres, tyres in storage or even those on vehicles will always present a difficult fire problem for industry and responding firefighters. The prospect of complete disposal or recycling of used tyres would eliminate this problem as well as resolving an unsightly environmental problem.

A used tyre takes up a lot of space, and its resistance to breakdown does not lend itself to easy disposal. Often excessive quantities of used tyres are stockpiled and times are stored against buildings which could increase the loss if a fire was to occur in the stockpile and then spread into the business destroying key infrastructure.

Disposal and recycling strategies include:

Note: At all times the storage areas for used tyres should away from buildings, other essential assets and large stockpiles should have fire breaks (separation) between stockpiles.

The greatest hazard associated with tyres has been from tyre explosions, several of which have been fatal. Tyre explosions are much more violent than a simple blow out.

They only involve tyres from trucks and heavy machinery, not from motor vehicles. When rubber is heated sufficiently it will release combustible gases inside the tyre, and this may continue until the lower explosive limit is reached. If the temperature is also above the flash point of the gases generated, then an explosion will occur.

The violence of any explosion is enhanced by the tyre thickness and pressure. Firefighters have seen tyres and rims being projected dangerously sideways after a tyre explosion which has had the energy to sheer off wheel studs at the hub.

Any tyre fires involving heavy machinery must be approached from the front or back, away from the sidewall of the tyre. The fire should be fought from a shielded position and once extinguished; the vehicle should be isolated for at least eight hours.

A common practice in the mining industry is to reverse a high volume water truck up against the tyre on fire to spray water for extinguishment and cooling purposes for long periods. This practice reduces the risk to emergency responders.

A simulation of a small tyre explosion involved in a combustion process can be seen at this link.

Craig has more than 27 years experience in the Fire and Emergency Services and Phill specialises in Fire and Arson Investigation. Do not hesitate to contact them on 08 6165 3333 or info@executiverisksolutions.com.au if you have any questions.