Terrorism and Political Violence risk on the rise for Australia

Aon, a global insurance broker, has produced its annual terrorism and political violence risk map. This year, Aon has raised the risk level for Australia; as well as 12 other countries also considered at increased risk of terrorism. 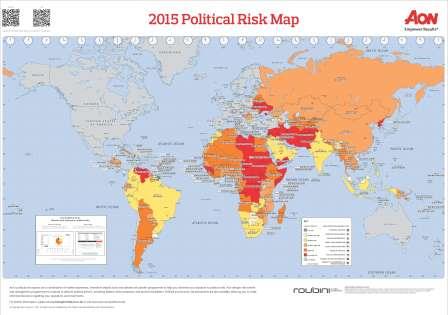 Alert or alarmed? Is Australia less safe than last year from terrorism?

Well, lets start by keeping things in context. Aon’s risk level for Australia has increased from ‘NEGLIGIBLE’ to ‘LOW’. And in the wider global context Australia is one of nine western countries where the risk of terrorism is assessed as being more profound. We join (amongst others) Canada, Denmark, Norway and Ireland. All of who are now also categorised at ‘LOW’.

Is the change on the Aon Risk Map warranted? We believe the simple answer is ‘yes’. With an estimated 250 Australian’s fighting abroad with Islamic State (IS), and some 20 already having being killed, there is some evidence of local radicalisation. There is also risk from returnees who have been fighting in Syria and Iraq; as well as the ‘call to arms’ from IS for local attacks in Australia. The Lindt Café siege, foiled plots and arrests are further evidence of intent. So too is the Australian Government’s recognition of the increased terrorism risk. Last year they increased the National Terrorism Public Alert level to HIGH- meaning that a terrorist attack is likely.

In the context of the international standard for risk management, risk is always characterised by likelihood x consequence minus mitigating measures. The likelihood of a terrorist attack happening in Australia could be as high as POSSIBLE and the consequences could be as high as CATASTROPHIC; but Australia’s mitigations are exceptional. The system of education, broader culture and way of life are all factors contributing to security. Plus Australia’s excellent law enforcement, border protection and security intelligence capabilities and the robust nature of our judicial system all counter the likelihood.

So Alert or Alarmed? Alert.

The same as we were last year when the risk was ‘NEGLIGIBLE’.

Tim Curtis is the Director for International Operations at Executive Risk Solutions. He is a former SAS Officer who is now armed with an MBA and a decade of experience supporting international businesses in volatile environments. In 2012-13, Tim raised a kidnapping prevention and response capability in support of a NYSE listed insurance company and 3600 policy holders globally.