ERS smooth transition into Oil & Gas : How we set up a first response capability into a Port environment with major fuel operations.

Executive Risk Solutions have recently expanded its extensive range of services by providing a fire response capability during bulk fuel operations in a Port environment. Given the skill sets already contained within the company the setting up of this new operation was relatively simply once notification that ERS was the successful tenderer was received. The competitive tendering process to provide trained and competent people with specialist equipment was an example of how quickly ERS can gear up using its experienced workforce during off periods from other locations. 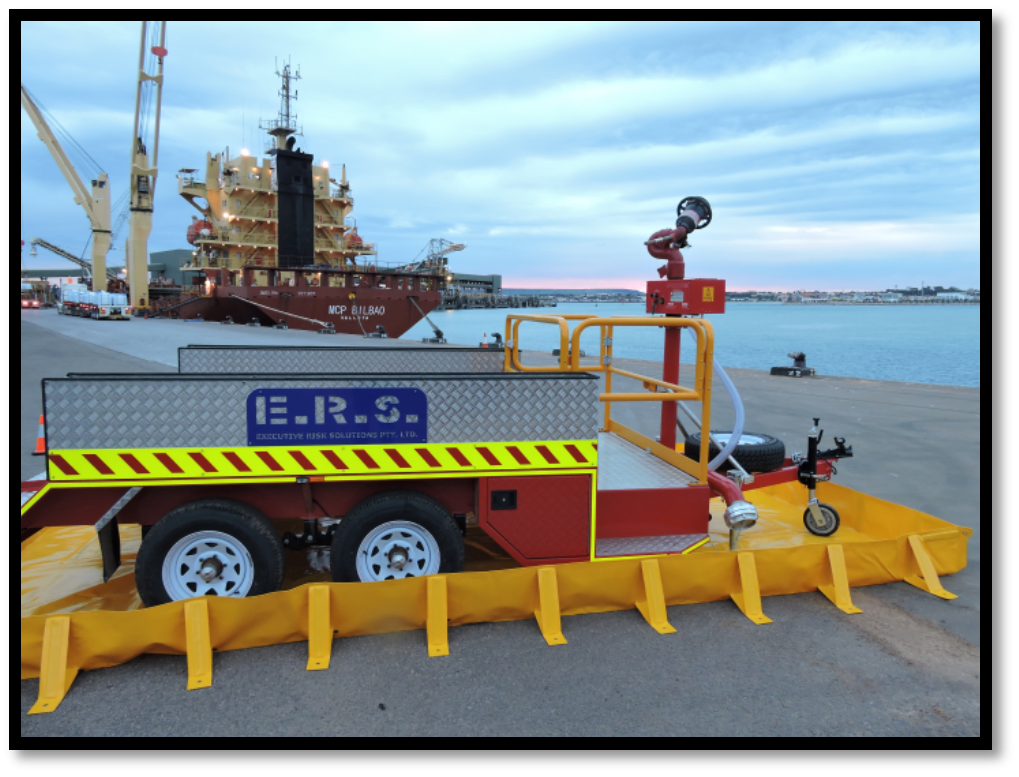 ERS, CEO Scott Houston said “ERS has had a strategic direction for some time to expand further into the Oil and Gas Industry and when the Port tender came up it was an easy choice given the direction of the Company”.

The services provided at the Port are during the unloading of combustible liquids (Diesel) and flammable liquids (Petroleum) from Fuel Tankers that come direct from Asia or via Kwinana (Fremantle Ports) in Western Australia. The unloading operation of the 10,000 to 16,000 tonnes of the liquids occurs at least twice a month for periods up to 36 hours.
The flammable and combustible liquids are decanted from the tanker via 200mm delivery hoses into a ground transfer manifold where the fuel is then pumped approximately one kilometer to the bulk storage facility. The risk assessments process for the unloading operation identified a number of high risks particularly during the unleaded petroleum liquid decanting.

The highest risk was the catastrophic failure of decanting hoses with the released liquid fuel or vapor coming into contact with an ignition source. Given the high volumes of flammable and combustible liquid being transferred is in excess of 500 tonnes per hour any high pressure and high volume release poses considerable risks to people, property and environment even if it does not ignite.

The strategic direction with a greater focus on Oil and Gas kicked off with the development of ERS staff and has seen a steady procession of Emergency Service Officers heading off for specialist Oil and Gas firefighting and spill handling training. The courses were delivered at the Texas A&M Engineering Extension Service (TEEX) facility in Texas, USA which is an Internationally recognised leader in the delivery of oil and gas emergency response training.
A number of the staff already deployed to the Port during unloading operations have successfully completed the Liquefied Natural Gas (LNG) Spill Control and Fire Suppression response and the Marine Oil Spill response for Freshwater and Coastal incidents. 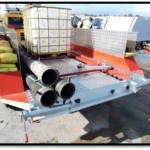 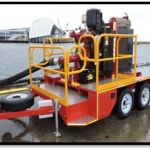 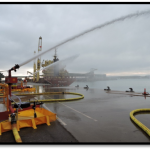 “Having trained and competent staff in oil and gas firefighting was one thing but requirements of the tender also saw a need for high volume water pumping and the delivery of foam solution” Scott said.

Other applications for the Unit may be to support Government Agencies and Industry during time of emergency and discussions are underway with the Department of Fire and Emergency Services of Western Australia (DFES) to develop interoperable arrangements.
The Unit consists of a High Volume fire pump and water/foam monitors which are trailer mounted for mobility and to meet industry needs. A rapid response to flammable liquid fires and spills on any Port is paramount given the volumes, volatility, complexities and potential environmental damage if a fire is able to take hold. Equipment was selected and tailored to meet the high volume requirements and at the same time being portable to meet the specific conditions during unloading operations.
To combat fires and spills, personnel have been trained using the equipment to immediately apply “B” Class Aqueous Film Foaming Foam (AFFF) at an induction ratio of 1 to 3%. The “B” Class foam selected for use by the Port and is used fires in combustible and flammable liquids, petroleum greases, tars, oils, oil based paints, lacquers, alcohols, and flammable gases worldwide. 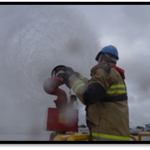 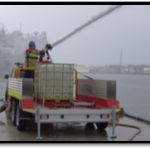 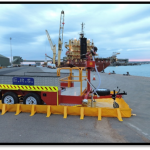 The “B” Class firefighting foam quickly provides a stable mass of bubbles produced from a mixture of water and foam concentrate that is designed to reach a specific expansion ratio. The foam has a sufficiently low density and flexibility to allow it to float on top of and form a blanket on the surface of the liquid burning or a split product that needs to be protected to suppress vapour.
The Hi Volume, Petro Chemical, Emergency Response Suppression Units power house is its 250 horsepower Cummins powered Darley centrifugal pump capable of delivering a range of water outputs from 5678 lpm @ 10.3 bar, 3974 lpm @ 13.8 bar, 2839 lpm @ 17.2 bar.
Two foam trailers are fitted with Williams Hydro-Foam Ranger 1.0 Water / Foam Monitors fitted with Hydraulic Driven Oscillators that are matched hydraulically to the fire pump and are interconnected by 125mm x 15 metre Hi Volume hose. The expansion ratios of the water / foam concentrate within the mixing chamber produces a foam stream that is able to combat atmospheric winds and penetrate strong thermal updrafts present at large scale fires at fuel farms, road tankers or a bulk shipping tanker in a Port.

The Ranger Monitor provides accurate foam proportioning, selectable to either 1 or 3% at flows from 946 to 3785 lpm while maintaining automatic nozzle tip pressures of 10.3 bar over the entire flow range. The Ranger is capable of projecting the water or foam/water solution 76.2 metres at 7 bar pressure in jet mode.
The advanced technologies of the Ranger Monitors delivers water only for cooling for asset protection or to induce foam concentrate into the water stream at either a 1 to 3% percentage. 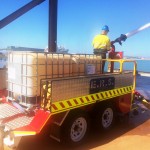 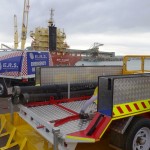 The Ranger Monitor produces non-aspirated foam and delivers foam concentrate and water solution to the hazard and relies on subsequent turbulence to entrain the air for expansion to a ratio of between 3:1 to 5:1.

The foam trailers have the provision to carry 2000 litres of foam concentrate in two Intermediate Bulk Containers (IBC). The IBC’s are connected to the Ranger Monitor via hard plumbed piping, valves and flexible 40mm suction hose with Cam Lock fittings which incorporate the IBC’s, nozzle and inductor into one device. 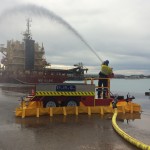 Visit ERS vehicles and equipment page to find out more or contact us on 08 6109 0115 or at info@executiverisksolutions.com.au